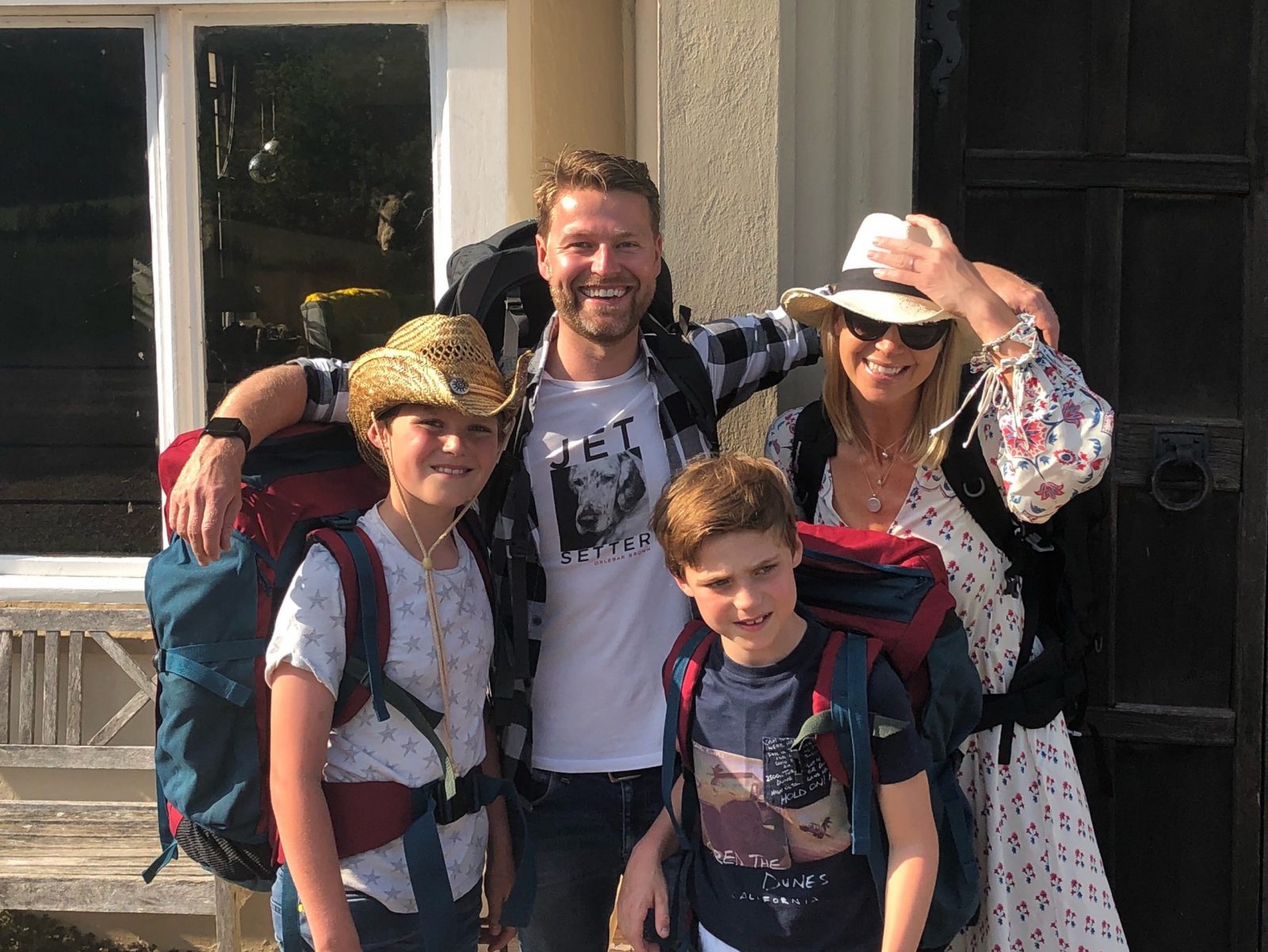 Posted at 00:36h in FEATURED, TRAVEL by Bricks and Stitches
0 Likes 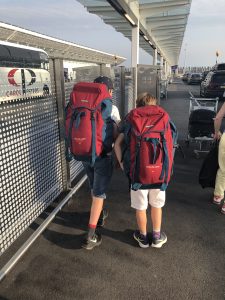 So our trip has finally started! After much deliberation over what to pack and a slightly frantic last day getting the house sorted out we finally left for the airport. The flight was fairly non eventful, we bought budget tickets with Avianca  and we definitely got what we paid for, much to Jamie’s horror we were offered ONE glass of wine for the whole 11 hour flight!  With the 6 hour time difference we arrived into Bogotá at about 3am and took an Uber (which got hopelessly lost) to our Air BnB near Parque 93 in the north which is an affluent, safe & buzzy part of the city. The apartment itself was fairly compact but was new, clean, in a great location and only cost us £41 per night.

After having a few hours sleep we hit downtown Bogotá, an eclectic mix of beautiful colonial buildings, poverty and culture. We planned to go to Andres Carne de Res for supper – the most amazing steak restaurant about 40 mins outside of Bogotá but we soon realised that because it was election day there was a 24 hour alcohol ban so we cancelled our reservation, steak has to be accompanied by red wine, non? Instead we went and had a delicious meal a stones throw from the apartment. 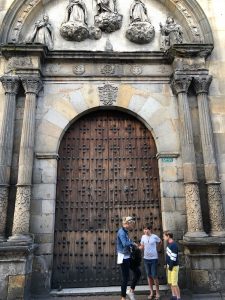 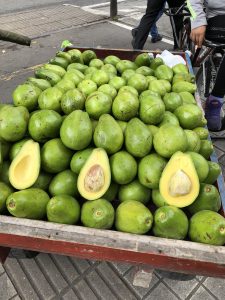 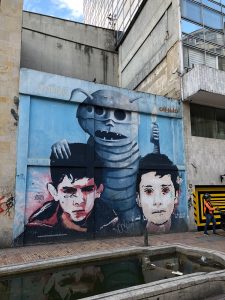 Today we took the cable car up the Monseratte mountain which towers over the city and is 10,000 feet above sea level. Unfortunately the weather wasn’t great, wet, cold and grey but despite this we still got the most incredible view of the vast city of Bogotá. We spent the remainder of the day wandering around exploing the diverse corners of the city. 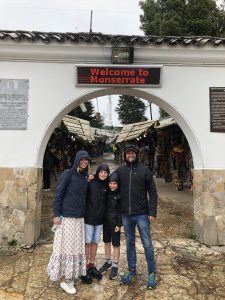 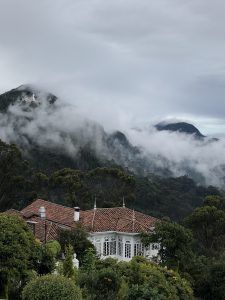 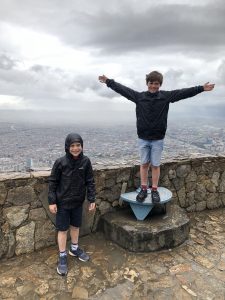 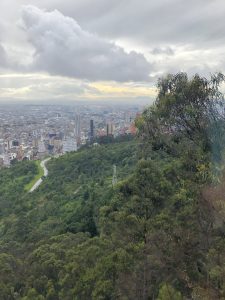 When packing, my brother who used to live in Bogotá, reminded me that the weather in the city is four seasons in one day and advised me to pack accordingly! We certainly have seen that in the three days we have been here. After yesterdays 13 degrees and rain our hearts lifted when we woke to blue skies, sunshine and warmth, ironically it would have been the perfect day to explore the Monseratte, instead we planned to spend the day visiting museums. You win some, you lose some! Anyway we had a great day exploring the gold museum which was really interesting and the military museum (which the boys absolutely loved, me not so much). Tomorrow we have a super exciting day as we are flying down to Leticia in the Amazon. In our opinion, three days in Bogotá is enough to explore properly. 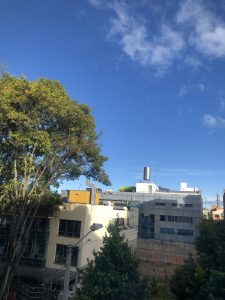 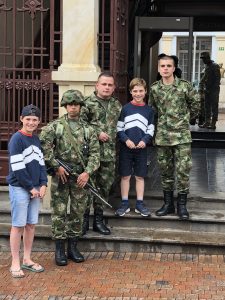 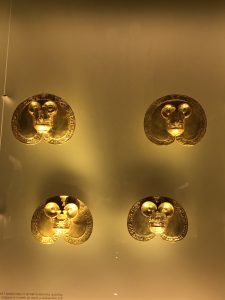 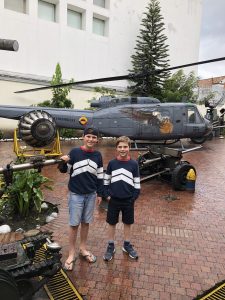 I have had a few people asking about the planning stages of the trip so below are a few tips;

Backpacks. There are so many backpacks on the market at the moment and I was slightly daunted by the wide choice available. As a result I did quite a bit of research before we bought anything. There seem to be two types of backpacks. The first is the traditional top loading trekking pack which is more difficult to access but offers more support if you plan to carry it for a greater distance. The second is also a newer style backpack which is more like a suitcase and unzips all the way round. It’s much more convenient for packing and unpacking but doesn’t offer as much back support as a traditional backpack if you plan to carry it for more than an hour or so.  We already had a couple of traditional top loading small packs,  45L Karrimore rucksacks which the boys are using. These so far have proved to be the perfect size for them, not too heavy but big enough to get everything in they need for 6 weeks, including a sleeping bag. I opted for a fairly cheap Berghaus 55L backpack with a 15L day pack that attaches onto it and have been super pleased with it. It cost about £50. Jamie bought an 80L Osprey rucksack which is more expensive option and has also been great. I bought masses of packing cubes to try and keep everything a bit tidier and they are absolutely the best thing I bought. They keep everything so much neater (particularly for the boys), the clean and dirty clothes dont get muddled up, its easier to find things and you can literally pack up and move on in a matter of minutes.

Jabs. As we are visiting the amazon we had to have the yellow fever jab. We also needed the Hep A and Typhoid jabs.

Currency. You can’t buy Colombian peso at the airport so you do need to buy these before you leave or upon arrival. The current exchange rate is about 3800 Columbian Peso to the pound.

Visas. We didn’t need a visa for Colombia

Washing we haven’t had a washing machine in any of the apartments we have rented and have had to do all laundry externally. We have also only had hot showers in Bogotá, although everywhere else has been so hot a cold shower is definitely the best option.

WIFI has been patchy, even in the cities and non existent in some places. I have managed to get 3 or 4G in the main towns and cities though.